skip to main | skip to sidebar

The maker of Tamiflu, the weapon at the heart of the fight against the H1N1 flu virus, says it is ramping up production of the drug that has a main ingredient largely supplied from few Countries as China, US, Canada and Switzerland. They have delivered approximately 5 million to 10 million emergency stocks of Tamiflu to the World Health Organization, And The Governments worldwide have already ordered about 220 million doses of the said drug. Marketed through Roche as Tamiflu, is the antiviral drug considered by medical experts to be most effective against flu variants such as H5N1 (bird flu) and the ongoing H1N1 outbreak.

Roche, based in Basel, Switzerland, can make as many as 400 million doses of Tamiflu a year but increasing production to its maximum "takes some time", Roche is also increasing its stocks of the raw materials used in Tamiflu, including the star aniseed spice that produces shikimic acid - the major ingredient in the antiviral drug. 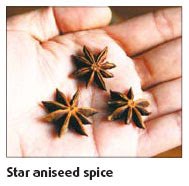 The dried, star-shaped fruit, mostly harvested from March to May, is a traditional ingredient in Chinese cuisine. Star aniseed exported from China reportedly accounts for 80 percent of the world's total, with the Guangxi Zhuang autonomous region one of the world's largest producers accounting for 85 percent of world's total output.
Posted by HjMahmood BA at 5:33 PM 1 comment: